Testing of Simplex reception in the area.

Thanks to all who participated in Wednesday's Simplex test. Unfortunately, we didn't have time to do the UHF portion, but there are some interesting observations to be made from the VHF results. 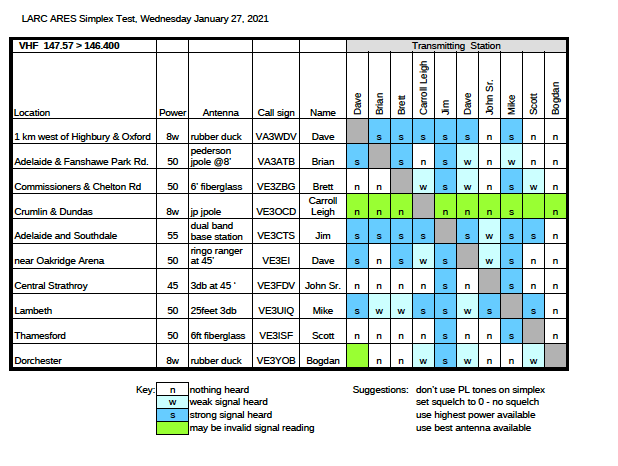 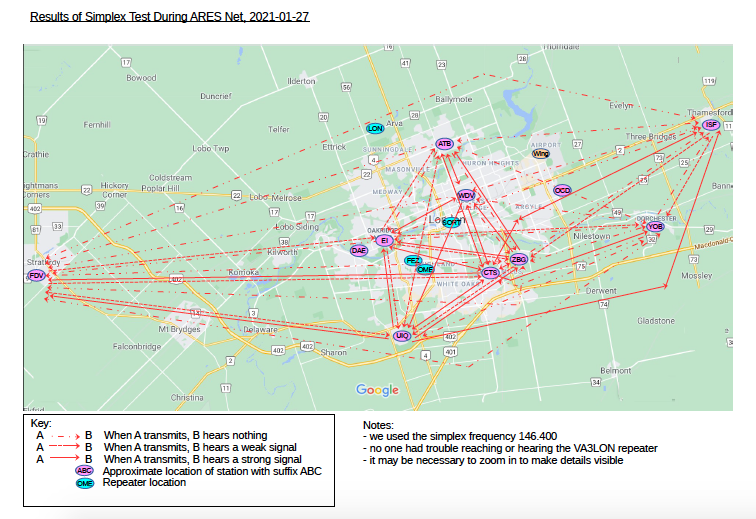 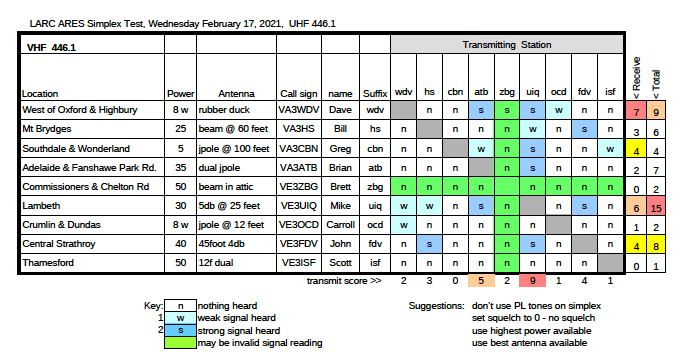 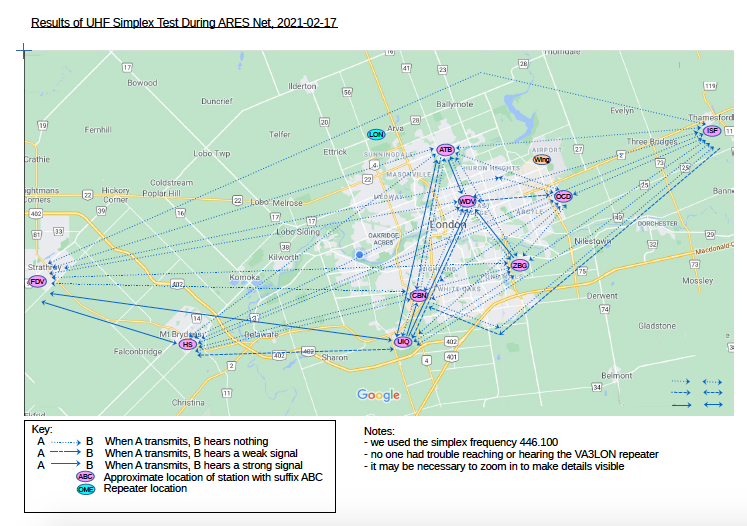 - Neither Dave VE3EI nor Doug VA3DAE participated in the test, leaving a bit of a hole in the west side of the city

- after the test, Brett realized he’d forgotten to switch over to his UHF antenna, and was using one for VHF. This was an unintended test of the question “Can you use a VHF antenna for UHF if you’re desperate? Looks like the answer is no.

- this is a pretty rough scoring system, and people with more nearby stations have an advantage

- the highest transmit scores were:

- the highest receive transmit scores were:

7  Dave VA3WDV, Oxford & Highbury, with an 8 W HT using a rubber Ducky. Impressive, although he was helped by

having lots of nearby stations

- overall, the best radio performance seems to be Mike VE3UIQ’s setup, who did well in both send and receive

- Mike also did well in the last VHF test

- the second best overall score was Dave VA3WDV, using an 8 W HT with a rubber ducky! (due to high receive score)

- In the map, I used a different way to represent the lines, and decluttered a bit by removing repeaters,

and stations that didn’t take part. Let me know if this is better. In the future I’ll use a map with less text.

- longest distance with strong signals both ways - Strathroy to Lambeth

- fewer buildings in the way?

- great radio configurations at each end

- same for Bill, to some extent.

- Carroll Leigh didn’t have much luck with send or receive - possibly due to low power, low antenna?

- have 4 drivers with good mobile setups poised on the north, south, east and west edges of the city

- have drivers note their location using a GPS, and then do test simplex transmissions in succession

- all participants in the test note how well they heard each driver, for stage 1, in a pre-built chart

- use a repeater to coordinate, maybe SORT network, and/or MMX’s repeaters

- after last driver’s test, all drivers move a fixed distance further away from the city ( 2 Km? 5 Km?),

and repeat the GPS recording, test transmissions, and results recording in stage 2 of the chart

- repeat this process until no one can hear the drivers, or some time limit is reached.

- gather the recorded results somehow, and summarize the results, somehow.

- Scott and Doug have already volunteered to be drivers for this type of test.

"Automatic Packet Reporting System (APRS) is an amateur radio-based system for real time tactical digital communications of information of immediate value in the local area. In addition, all such data is ingested into the APRS Internet System (APRS-IS) and distributed globally for ubiquitous and immediate access." - Wikipedia

Here is a link to the home of APRS.

"EchoLink is a computer-based Amateur Radio system distributed free of charge that allows radio amateurs to communicate with other amateur radio operators using Voice over IP (VoIP) technology on the Internet for at least part of the path between them." - Wikipedia

Here is a link to the home of Echolink.