The club was featured in The Londoner 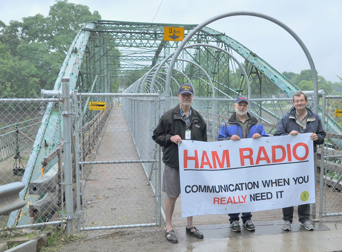 Thanks to everyone who came out and operated.

On Saturday, July 20, 2013 a group from our club participated in a new "Historical Bridges" event.

Operating from the grassy area East of the Blackfriars bridge. Radio conditions weren't great, but we did make some contacts, including a great one with the Golden Gate bridge in San Francisco. The weather was spectacular, and so was the antenna collection: a magnetic loop, a 2 element beam, and one of Bob Rice's creations.