Hams operate at LMHU during "Bring your children to work day"

November 5th was "bring your children to work day" at the LMHU (Middlesex-London Health Unit). We were contacted by Marilyn Ashworth and asked if we would be able to demo their amateur radio equipment and speak to the students about the hobby. Dave Lambert VE3KGK,  Ansil Rock VE3HDR, and Jim Morris VA3AHQ went to the LMHU and operated from 1:00 to 2:30. There were 7 grade 9 students who attended our session, they had been to other sections of the LMHU to learn about the different functions of the health unit.

We explained some of the history of amateur radio, how Rocky began his interest in the hobby ( his father was a ham, so it was always around him), how amateur radio would be an important role if an emergency occurred in the area. David explained about QSL cards and he had brought his collection for the students to have a look at. Jim, explained a bit about digital modes and how psk31 is similar to texting, but the signal goes through the radios, instead of through a cell phone. We then made a few contacts, tuning around the band on 20 meters and made contacts on 15 meters, one in the Canary Islands and another in Hungary. The students were interested in what was shown and explained to them, I don’t think any of them were familiar with amateur radio. They asked many questions and seemed excited when we did the QSOs.

Hopefully we made it interesting enough for the students that one of them may take up the hobby. 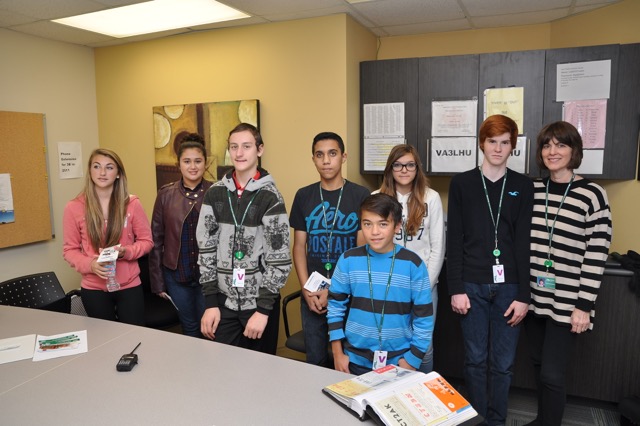